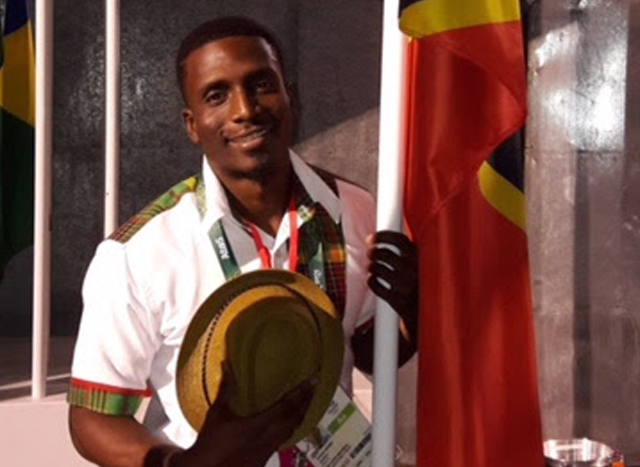 Rio de Janeiro, August 12, 2016. As the Rio 2016 Athletics gets underway, the SKNOC takes five minutes out with each athlete, to get an insight into their time at the Olympic Village.

In the spotlight today is: 27-year old Team Captain and Flag Bearer, Antoine Adams, who recently won the 2016 National Track and Field Championship and is record holder of the 200m at National Youth, Junior and Senior categories.

How are you spending your days?
I am spending these last few days before competition starts mainly training, eating and sleeping. Rest is most important. Training is at a minimum rate right now. My coach and I are just fine tuning and getting the body ready to take on the best in the world. I have been getting my usual 7 hours of sleep, but I have also been taking naps during the day lately.

What do you eat? Is there anything you can’t resist?
My diet mainly consists of carbs and protein. I usually start overloading on carbs 3 days out from competition. It is almost like I am filling up my energy tank. I have been addicted to cassava lately for breakfast, lunch and dinner. It gives me this boost of energy and my body just reacts great to it.

Do you have any preparation rituals?
I really like to laugh and have a little fun before competition. It relaxes me. Other than that I am listening to music and chilling.

Where have you been in Rio, what have you seen?
I have not been anywhere yet. I am focusing on getting ready for my events. I have been going back and forth between the track for training and the Olympic Village.

What are your impressions of the Olympic Village?
It is fine with me. Very beautiful. It gets the job done which is most important.

Are there any similarities or differences compared to the Olympics in London 2012?
The atmosphere is about the same to me. The best athletes from around the world have come together to compete at the highest stage in sports. It does not get any better than this.