“It all started in St. Kitts” 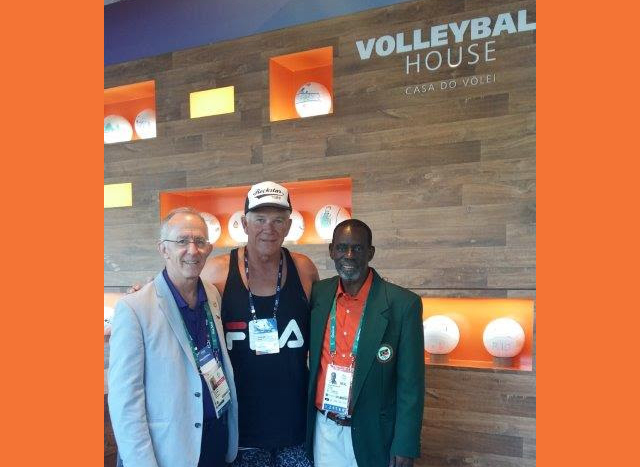 Standing on the left is VP of Connor Sport Court International, Andrew Gettig, a former Peace Corps Volleyball coach in St. Kitts from 1987 to 1989 for the Department of Youth, Sports, Social and Community Development. On his right, beach volleyball legend Randy Stoklos of USA who, together with Gettig, organised an historic goodwill tour to the island 26 years ago that saw the first ever suspended outdoor volleyball court come to St Kitts.

For Andrew Gettig, the highlight of his career back in St. Kitts was to be hired by Sport Court Inc., the manufacturer of that very same outdoor volleyball court on the island and he remains with the company after 25 years. Working together with the FIVB (International Volleyball Federation), Sport Court Inc. has donated over 50 special outdoor volleyball courts to developing regions.

As Andrew comments, “It all started in St. Kitts”.

Mr. Bridges, a director at the time at the same Department, said, “I was grateful to meet up again with these two very special people; we owe Andrew and Randy a debt of gratitude for the part they played in developing Volleyball in St. Kitts.”