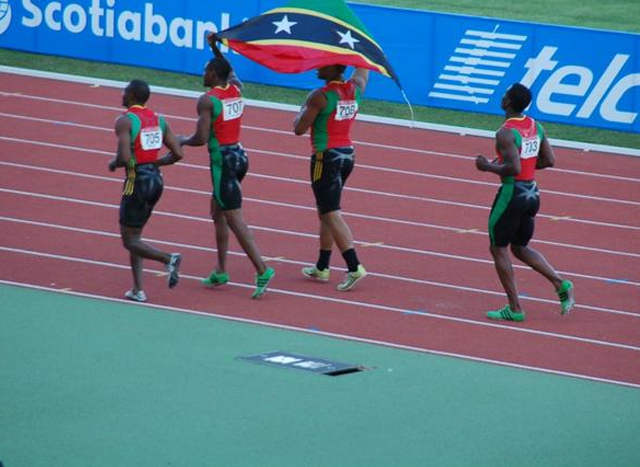 For the 6th time in the past twenty-four months, the St. Kitts and Nevis 4X100m male relay team has shattered the National Record! The ‘first time Olympian Quartet’ – Lestrod Roland, Jason Rogers, Antoine Adams and Brijesh Lawrence, ran a time of 38.41 seconds shattering the previous record of 38.47 seconds, set back on Sunday 4th September 2011 in Daegu, South Korea.

Our young Olympians managed to keep the athletic federation in the World’s top (16) sixteen 4X100m pool; a position that will no doubt qualify the team for the 2013 World Championship in Athletics to be held in Moscow, Russia. This is based on the standards used at the most previous championship (39.20seconds).

In an email to the Relay Boys, President of the SKNAAA Mr. Glenville Jeffers expressed his heartfelt congratulations to the 4X100m relay team for an outstanding performance and setting the new national record.

The SKNAAA and the SKNOC extend congratulations to our young men for resetting the record books at the most elite gathering in sports!