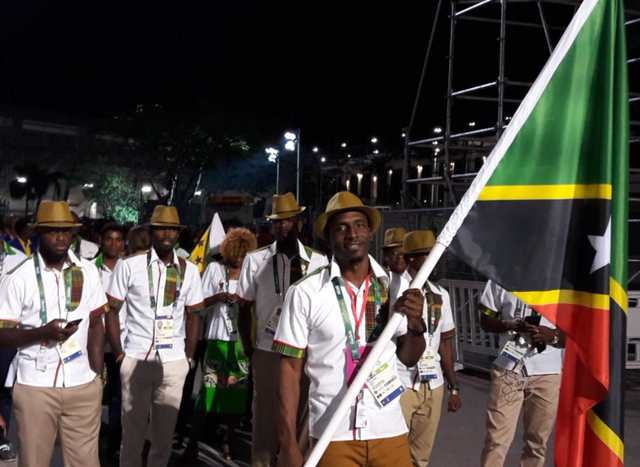 Rio de Janeiro, Brazil August 5, 2016: Olympic Team SKN Captain and record holder of the 200m at National Youth, Junior and Senior categories, Antoine Adams proudly carries the National Flag of the Federation of St. Kitts and Nevis, on behalf of the SKNOC, during the glittering Opening Ceremony of the Rio 2016 Olympic Games.

In the presence of almost 80,000 spectators in the iconic Maracanã Stadium in Rio de Janeiro and an estimated 3 billion watching ‘LIVE’, Team Captain Antoine leads the roster of athletes competing in the discipline of Track and Field which include Brijesh Lawrence, Tameka Williams, Kim Collins, Jason Rogers, Lestrod Roland, and Allistar Clarke.

With national pride, the team wear their new uniforms designed especially for the opening ceremony by Fashion Designer, Yakima Daniel. Featuring the colours of the national flag, athletes wear a white base shirt adorned with the green madras colour of St. Kitts and Nevis.

Olympic Team SKN will be back at the Olympic Stadium for the start of the Track and Field events which get underway on Friday August 12, 2016.