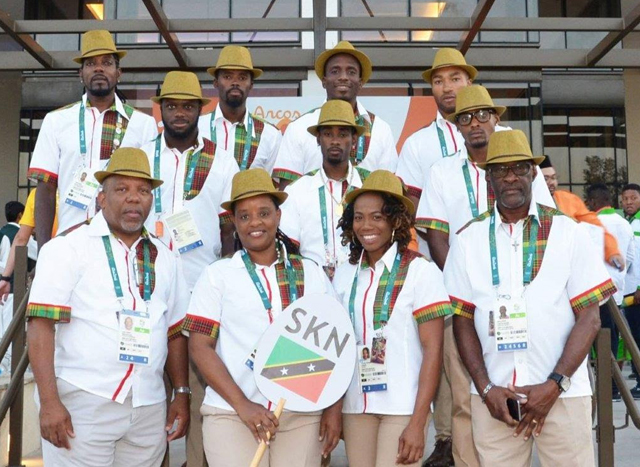 Commissioned by the SKNOC, for whom the presentation of each athlete and team member was of paramount importance for the Federation as well as for their appearance on the world stage of Rio 2016, the new outfits were voted amongst ‘The Best Team Uniforms at the 2016 Olympics Opening Ceremony’ by Essence Magazine.

Keeping local, but on trend, the designs of Yakima Daniel of Kiwie Dan Couture, were inspired by the colours associated with the culture and beauty of the islands of St. Kitts and Nevis.

It was a dream come true for Yakima who said, “I felt really honored when SKNOC approached me to design their outfits for the Olympics Opening Ceremony. The opportunity came along at the time when I was designing my Patriotic Line to be released for this year’s Independence Day in September, so it was easy for me to come up with a fabulous design for our delegation that said something about St. Kitts & Nevis but which was also trendy.”

In designing the outfits, Yakima focused on a tailored white base shirt for both men and women adorned with the strong green madras, yellow, red and black colours of the National Flag defined on the inside collar, the yoke, the short sleeves and on the front of the shirt. Both male and female team members wear the same button-down fitted shirt paired with brown trousers and brown shoes. The whole ensemble is finished with a fashionable panama style hat.

Born and raised in St Kitts, Fashion Designer, Yakima Daniel is CEO of Kiwie Dan Couture, a company built on innovation, sophistication, and individuality, where all items are made in St. Kitts & Nevis. The kaleidoscopic designs range from casual, then contemporary, up to a more sophisticated style. Kiwie Dan Couture has been recognized not just locally but also internationally.

The St. Kitts & Nevis Patriotic Line will be released during the last week in August and will be available at the boutique Kiwie Dan Couture located on Rosemary Lane, Basseterre in St. Kitts and also on the website www.kiwiedan.com.