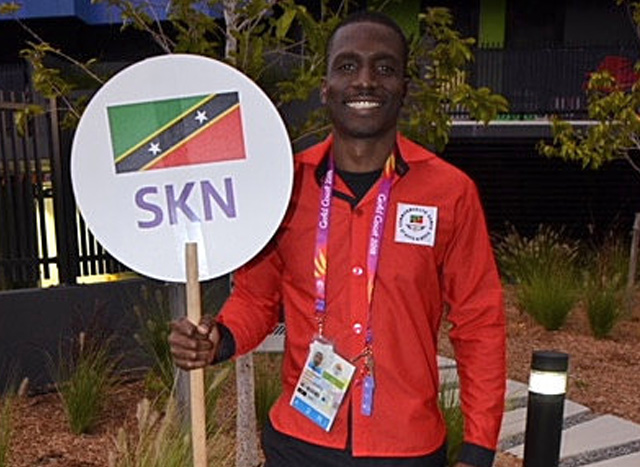 Gold Coast Australia, 06 April 2018: It was a day of mixed fortunes for the St. Kitts and Nevis Team at the Commonwealth Games today. While men’s 400 metre runner Warren Hazel arrived to complete the contingent, the athletic team lost ace sprinter, Antoine Adams, due to injury.

Team Coach Lonzo Wilkinson said he observed Adams going through his training paces yesterday and was concerned over the way the athlete carried his stride in the last ten metres of a 60 meter wind sprint which he had to run flat out. “I immediately asked him to stop then asked Medical Director David Steven to have a look at him on site,” Wilkinson said.

Steven, who has been working with Adams since he arrived on the Gold Coast a week ago diagnosed Adams with a hamstring injury. An MRI at the Polyclinic in the Games Village later confirmed a Grade 1 tear of the hamstring fascia. For his part Adams stated that the injury had shown during practice in Houston Texas last week and at that time his training had been halted to give him an opportunity to recover in time for competition in the Gold Coast.,

“Antoine is going to need anywhere from 18 – 21 days before he can resume full training,” Steven stated. Meanwhile he is receiving ice, laser and acupuncture treatment. Chef de Mission, Lester Hanley confirmed that the SKNAAA had been informed and that Adams has now been officially withdrawn from competition.

“I’m really disappointed and a little sad because I was looking forward to competing,” Antoine said. “I felt that this was the year that I would make my mark at The Games. But at this time I just have to keep the positive energy up for the rest of the team. I’ve seen them in training and think the potential is there for them to get all the way to the finals,” he continued. Adams was due to run in the 100 metres preliminary heat on Sunday afternoon. Now he will miss not only that heat but the entire Games.