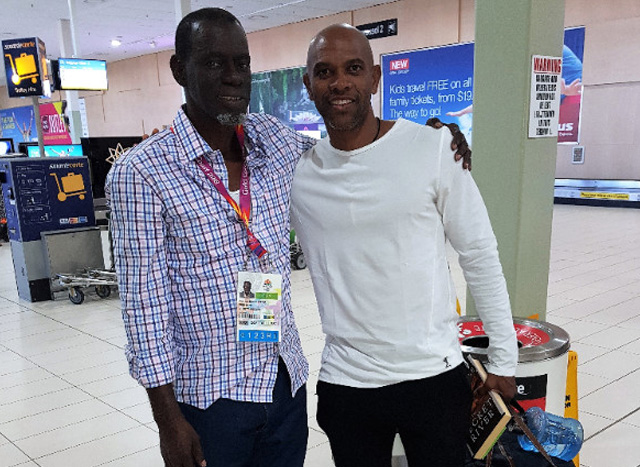 The visit by Kayamba represented a major show of support and inspiration to the athletes, following disappointing outcomes in Track and Field, Beach Volleyball and Table Tennis during an intense week of competition.

President Alphonso Bridgewater said, “We are extremely grateful for the support by Mr. Keith Gumbs in making time out of his busy schedule to meet the athletes and delegation at the Commonwealth Games. His presence provided a great morale booster to the athletes coming up to the close of the Games.”

Mr. Bridgewater continued, “Kayamba, as he is affectionately known, is among the most acclaimed of national strikers to this very day and I had the distinct honour and privilege of serving as his Coach over an extended period when I was National Coach & Trainer of the SKN Soccer Team. I was enthusiastically delighted to have arranged for him to visit us on the Gold Coast, a true inspiration to current and aspiring national athletes.”

Speaking of his visit, Keith Kayamba Gumbs said, “I want express my sincerest gratitude to you and everyone who made it possible for me to travel to the Gold Coast. It was great to experience a bit of what it is like to be at the Athletes Village and being amongst the athletes at a major competition. One of the most important things about the trip was being able to meet up with yourself and other elder statesmen, some of whom have contributed to my life and career in some shape or form. Good to rekindle old friendships and this will be a moment I will treasure for a lifetime. I hope that our athletes learned a lot from this experience and grow from strength to strength. Keep pushing on and continue to inspire the young generation of SKNAAA administrators. Appreciate what you guys have done in the past and are continuing.”

Keith ‘Kayamba’ Gumbs represented St. Kitts and Nevis in multiple regional, international competitions, including World Cup qualifier encounters. He also served as Captain of the National Soccer Team on many occasions and was the only St. Kitts player to have won the Top Scorer award for six consecutive years, and Best Striker award for seven consecutive years.

Kayamba eventually turned professional and plied his trade in Malaysia, Indonesia and in Australia where he was elevated to the position of Captain and later Coach and Player of the Teams he played for in these adopted countries. Now living in South Australia, the Gold Coast proved a fitting venue to meet with Team SKN and catch up with former coach, Alphonso Bridgewater.

Commenting further on Kayamba, President Bridgewater said “Kayamba is an iconic national sports figure who features among the pioneers of individual sports men and women who blazed the trail before embarking on their professional path. He was patriotic to the hilt, responding often and enthusiastically to the various calls to return to represent SKN in qualifying and/or representative encounters. He was as passionate as they come and purposeful to the hilt– all attributes to his distinctive character which makes him such a beloved son of the soil of SKN.”