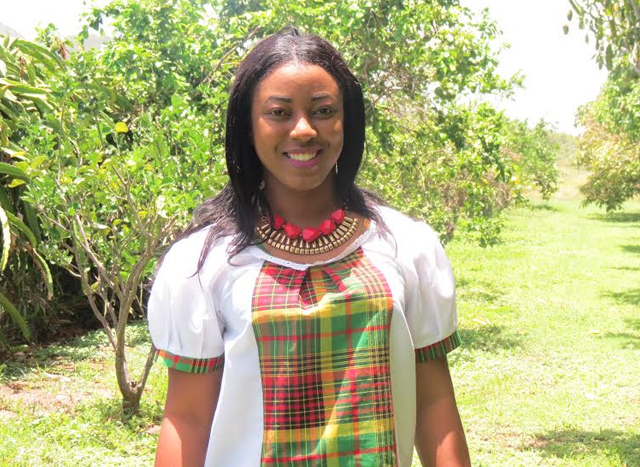 YAKIMA DANIEL of Kiwie Dan Couture is the designer of the outfits for #TeamSKN at the Rio Olympics Opening Ceremony.

We took some time out to speak to Yakima about this big moment and here is what she said:

What started out as a dream, is now a reality.

Born and raised in St Kitts, I am Yakima Daniel, the Fashion Designer and CEO of Kiwie Dan Couture.

Kiwie Dan Couture is a company built on innovation, sophistication, and individuality. The kaleidoscopic designs range from casual, then contemporary, up to a more sophisticated style. Kiwie Dan Couture has been recognized not just locally but also internationally. The first collection was sold in 2013, our “Summer Collection” to Entrada Couture, a boutique in St Petersburg, Florida, owned by Maria McGill, the first fashion designer for Dancing with the Stars.

I felt really honored when a representative from the St Kitts Nevis Olympic Committee (SKNOC) approached me to design their outfits for the Olympics Opening Ceremony that will take place in Rio, Brazil on 5th August 2016. Could you imagine seeing your designs on a world stage next to the designs of other top designers such as Ralph Lauren and Christian Louboutin? Wow!

I realized that they would need something that said St. Kitts & Nevis but also trendy. My first thought was the fit. An athletic cut shirt would be best. Such a shirt would have to be a button-down. The next step was colors. I used the green madras which is associated with St Kitts and Nevis. We use it in our National Wear. It consists of the colors that are in our National Flag; green, yellow, red and black, except for white. So, I decided to have a white base shirt and adorn it with madras in certain areas such as the yoke and parts of the front. This shirt would then be paired with a black pant and black shoes.

It is quite amazing that this opportunity came along at the time when I was designing my Patriotic Line to be released for this year’s Independence in September. So it was easy for me to come up with a fabulous design for our delegation.

The Patriotic Line will be released the last week in August and would be available at the boutique Kiwie Dan Couture located on Rosemary Lane and also on the website www.kiwiedan.com.