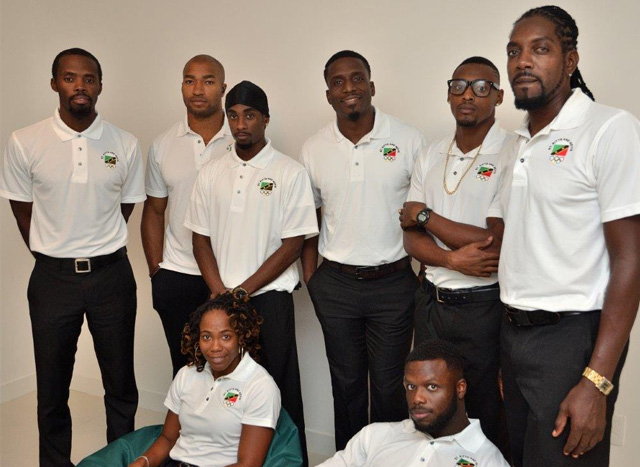 Rio de Janiero, Brazil August 5, 2016: The SKNOC is pleased to announce that the majority of the Olympic Team SKN is now happily settled into their quarters at the Athletes Village in Rio, preparing for the start of the Games and looking forward to joining the Opening Ceremony later today. Physical Therapist and Masseuse, Ms. Joanne Hayes, part of the team providing technical, therapeutic and administrative support directly to the athletes, is due to join on August 8th.

The SKNOC, however, regretfully confirms that sprinter Kim Collins will not be present at the Opening Ceremony in Rio 2016. However, his request to join the team on August 7th due to cramp issues was approved.

28-year old Antoine Adams, who recently won the 100m event at the National Track and Field Championships and is the record holder of the 100m at National Youth, Junior and Senior categories, has been named Team Captain for Olympic Team SKN and Flag Bearer for the Opening Ceremony.

Speaking on his arrival, Antoine said, “I am excited to finally arrive in the Athletes Village and eager to get started on the competitions ahead, in addition to being honoured to be chosen to lead the Team at the Opening Ceremony.”

The full roster of seven (7) athletes competing in the discipline of Track and Field (Athletics) is confirmed as follows :