TIJUANA, Mexico, September 19, 2016 – Members of the Saint Kitts and Nevis Beach Volleyball National team began a Training Camp as part of their preparation for qualification to the 2018 Central American & Caribbean (CAC) Games in Baranquilla, Colombia and the 2019 Pan American Games in Peru.

This camp is part of the efforts of the St. Kitts & Nevis Olympic Committee (SKNOC) and the North, Central American and Caribbean Confederation (NORCECA), in supporting the development programs of the St. Kitts Amateur Volleyball Association (SKAVA) with the support of the Regional Development Center in Mexico and the Norceca Central Zone.

The training sessions started on Sunday after the athletes’ arrival from St. Kitts. The Saint Kitts and Nevis players will train in Mexico under the direction of two times Olympic player and Guadalajara 2011 Pan Am Silver medal winner, Mayra Garcia.

The Kittitian players will scrimmage with players who are parte of the State Sports Talent Program of Baja California in order to get the best of their stay in Tijuana before their participation in some tournaments that will take place in Hermosa Beach, in the United States. 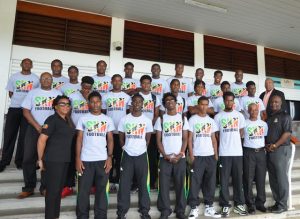