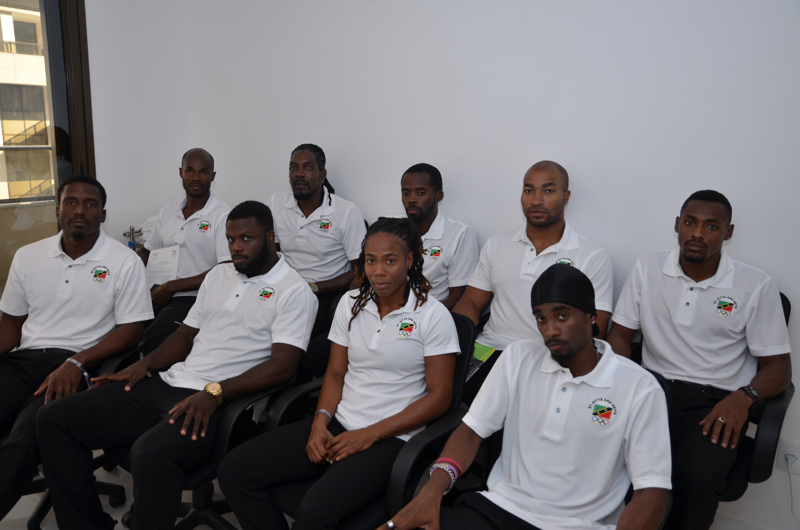 Rio de Janeiro, Tuesday August 23, 2016: On the eve of Olympic Team SKN’s return from the Rio 2016 Olympic Games, President of the SKNOC, Alphonso Bridgewater, said he was proud of the efforts displayed by athletes while expressing disappointment at the overall performance of the team.

He said, “Medals aside, the SKNOC expected better results from Olympic Team SKN. However, while being disappointed, but not disheartened, we are proud that the athletes made it this far; and each athlete should also be proud of their own achievements in qualifying for the world’s greatest games.”

Earlier at the close of the Games, Mr. Bridgewater, on behalf of the SKNOC, extended his personal congratulations to the team made up of Team Captain, Antoine Adams, Tameka Williams, Brijesh Lawrence, Kim Collins, Jason Rogers, Allistar Clarke and Lestrod Roland, while also extending a special congratulations to Kim Collins for his continuing age-defying performances.

Head Coach, Donnell Esdaille said,”The games are over and our high expectations were not achieved, however we were grateful for the opportunity to represent our country at the pinnacle of all the sporting events, the Olympic Games. The team will continue to learn, grow and eventually attain the goals we set out to achieve. We saw evidence and glimpses of our potential displayed at the games, so we know with continued support and encouragement, the future of the Athletics, at this level, will be in good hands. Thanks to all who contributed to this process.”

Chef de Mission, Leroy Greene, also commenting, said,”The Rio Games in my view was a huge success. Although Team SKN did not achieve all of its goals we think that we represented the Federation well. We look forward to doing so again in Tokyo in 2020”.

The SKNOC encourages the nation to welcome the returning athletes arriving Wednesday reminding Kittitians and Nevisians of some significant facts, namely,

Mr. Bridgewater once again welcomed the visit to Rio 2016 of the Hon. Shawn Richards, commenting that “Minister Shawn’s official visit to the Olympic Village and his Ministry’s commitment to sport development, sets the pace for athletes preparing for their next competitions.”

He concluded, “Praise should be extended to the Rio 2016 Organizing Committee for surmounting the challenges and demands of hosting an event of this magnitude while we also recognise the courage and character of the first South American country and population to stage these Games.”

Team Members and Athletes returning from Rio 2016 to St. Kitts on Wednesday August 24, include: