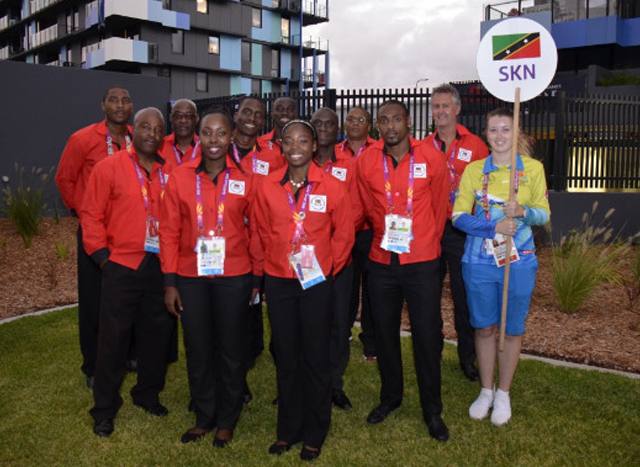 Commenting on the performance of Team SKN, President Bridgewater said, “We are proud of the returning athletes and acknowledge the hard work and sheer determination they showed at all levels during the Games. Despite not celebrating a win, every one of the athletes met the qualifying standard in each of their respective sporting disciplines and deserves to be recognised and celebrated for their individual achievements.”

Endorsing those words, Deputy Prime Minister and Minister for Sports, Education, Youth, Sports and Culture, the Hon. Shawn Richards, who made an official visit to the Games, said, “I was equally proud of the team’s performance and applaud their success in qualifying; by simply participating in these impressive Games they have achieved a huge goal, they have improved upon their own performances and learnt from individuals they have trained and competed with. Not only that, one of their proudest moments would have been to wear the flag of St. Kitts and Nevis to a global audience and be seen as ambassadors for their country.”

The full roster of eight athletes for GC2018 included Antoine Adams, Jason Rogers and Shenel Crooke for the 100m and Warren Hazel for the 400m in Track and Field; St. Clair Hodge and Shawn Seabrookes for the Beach Volleyball and Angelisa Freeman and Shakquan Hodge for the Singles & Mixed Doubles in Table Tennis.

On the Track, 100m sprinters Shenel Crooke and Jason Rogers made up for the sad exit of injured sprinting ace, Antoine Adams, advancing in great form to the semi-finals in which Jason drew the No. 1 seed and training partner, Yohan Blake. Jason also gained qualification in the group of fastest finishers after the automatic qualifiers.

Making his debut at the 2018 Commonwealth Games, and the youngest athlete in his race, Warren Hazel ran strongly in his 400m race, also making it to the semi-finals.

Beach Volleyball pair, St. Clair Hodge and Shawn Seabrookes also put in their best efforts on the volleyball field as they made their debut playing against Trinidad and Tobago, Australia and Fiji; as did table tennis newcomer, Shaquan Hodge, in his competitions and Angelisa Freeman who returned to Commonwealth competition having debuted in Glasgow in 2014.

President Bridgewater continued, “We were very fortunate to welcome the Deputy Prime Minister, Hon. Shawn Richards to the Athletes Village who, along with Mr. Keith “Kayamba” Gumbs also visiting, proved a great inspiration to the Team and we thank them for their support and time.”

The XXII Commonwealth Games in 2022 will take place in Birmingham, UK.