Tribute on the passing of Steadroy Tish Techeira by Alphonso E Bridgewater President of the St. Kitts and Nevis Olympic Committee (SKNOC) 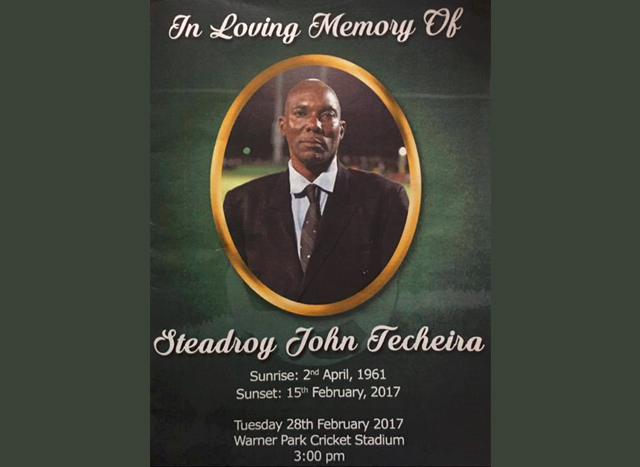 In the name of the St. Kitts and Nevis Olympic Committee ( SKNOC), I extend sincerest condolences on the passing of “Tish”, to the family, friends and various fraternities, who would, undoubtedly, miss his passion for service and reliable stewardship, his consistent and exemplary display of humility and simplicity, his unquenchable appetite for volunteerism–though most notable evidenced through his vehicle of choice, namely, sports– was just as emphatically witnessed in the fields of culture, education, creative journalism and religion. The picture thus painted would not be complete without mention of the contagious “Tish Branded” smile and his enduring capacity to be the ‘ultimate referee’ as well as to always find space for the unconditional and compassionate embrace of the vulnerable.

In a very real sense, ‘Tish’ must be featured among the most worthy of our unsung heroes, be named, even, among the legends. I am reminded of the reference Apostle Paul (in Thessalonians, Chapter 1:1-10) made when he paid tribute to the early christians in Thessalonica, who in typical Techeira style– simple yet steadfast, humble yet honest, passionate yet pertinent– promoted a persuasive message and demonstrated tremendous faith as they engaged the people of Thessalonica seeking to dissuade them from idol- worshipping. Paul’s commendation to those early christians has parallels in the case of “Tish”. Paul said of them, then, that their “message rang out from (them) not only in Macedonia and Achaia” … but that “(their) faith in God has become known everywhere. Therefore we do not need to say anything about it.” So it is with “Tish” that his simple yet significant message of the power of sport and the spirit of volunteerism in a partnership with education and religion catapulted a lowly King Street/Games Town boy into the pride of the community, institutional recognition, national consciousness and regional/international stature.

The SKNOC, for its part, benefitted indirectly from Tish’s stewardship, service and volunteerism to its Member Federations ( MFs)- be them individual or team sports. More directly, the SKNOC was a beneficiary through the involvement and participation of Tish at its various events and activities- among them the annual Olympic Day Programme where we also had the privilege of receiving double portions of contributions from the inseparable duet of “La and Tish” ( Lascelles Gumbs and Steadroy Techeira). His entry into the realms of the Special Olympics and his distinguished and sustained relationship with this organization is phenomenal and personal to holder.

To illustrate its appreciation for the stewardship, service and volunteerism of Steadroy “Tish” Techeira, the SKNOC recommends and expresses its willingness to pioneer the establishment of the “Steadroy Teddy Tish Techeira Volunteer Award”. It is envisaged that:

(i) the award will be annual
(ii) the award will be given to individuals or groups
(iii) recipients must demonstrate exemplary acts, contributions of stewardship, service and volunteerism through a combination of sport and one or more of the following: education, culture, religion or institution
(iv) specific attention will be paid to unsung heroes/ heroines; the characteristic of humility, the youth, community or institutional impact of the contributions

In closing, I express the thanks and appreciation of the SKNOC to the Tish’s family and close relations who must have been a bulwark of support to “Tish”, himself, in order for him to have been available to the rest of us with such alacrity. Thank you for your unselfishness and selflessness which were so much a similar feature of the life of “Tish”.

Steadroy Tish Techeira’s life was his message. I trust that we were all listening.