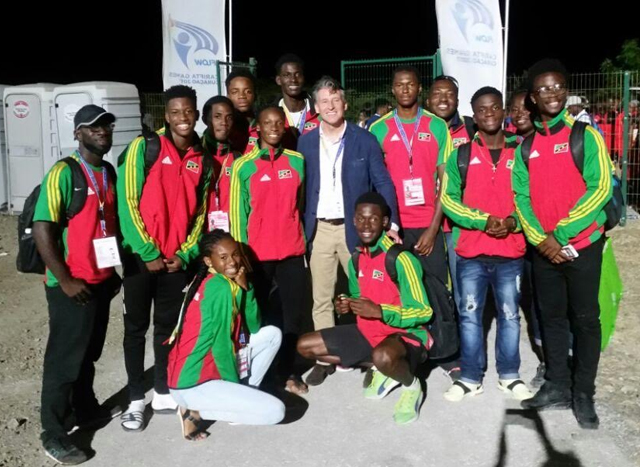 This amount was required to facilitate travel and preparation for the National Representative Team, which picked up a Gold Medal over the weekend.

The national team journeyed to Curacao via Virgin Islands Air Link Charter valuing at USD32, 600 or EC$88,570.94. The SKNOC was very instrumental by ensuring that this was made possible by covering 50% of the charter cost.

Our Federal Government also made a generous contribution of EC20, 000.00. This would have been the second consecutive time within weeks that the Government would have honored financial requisitions from the SKNAAA, having also donated EC40, 500.00 to assist with replacing the High Jump bed and other equipment destroyed in a fire at the Kim Collins Athletics Stadium, days before the major inter school competitions.

Other ancillary expenses budgeted to prepare Team St. Kitts and Nevis included accommodation levies, uniforms and gear for the team, inter island travel, stipends and emergency funds. This equates to a total of EC$112, 399.81.

At the 2017 FLOW CARIFTA Games, St. Kitts and Nevis secured a Gold Medal for the third consecutive year, when Under 20 Male High Jump Athlete, Jermaine Francis outclassed his competitors in grand style to secure the CARIFTA Games Record, the National Junior Record and National Senior Record.

Francis’ performance now ranks him at #2 in the World for an Under 20 Athlete and #19 overall. Along with Francis’ historical achievement, there were a host of highlights which includes Jahnaza Francis’ double World Under 18 Qualifying Performances in the 400m and 400m Hurdles, Leroy Chapman’s personal best in the 800m Heats and Finals, the Under 18 Male 4X100m and 4X400m Teams being competitive and advancing to the Finals, Shanice Elliott being the first Female Junior Sprinter since 2009 to advance to the Final in an Under 20 100m and a cohesive effort by the team overall to excel.

The team of eleven (11) athletes and three (3) officials is scheduled to return to the Federation later today (Tuesday 18th April 2017).

The SKNOC and the Federal Government of St. Kitts and Nevis remain the major financial contributors for the SKNAAA. Within the past two (2) years, well over one million dollars was spent on preparation and competition which was made available as a result of their generous contribution. For this, the SKNAAA remains grateful.